I’m finally back – on MY OWN blog. I was concerned that Sherman was trying to overthrow me, but as my trusted adviser, Deb, pointed out, Sherman is experiencing a crisis with his troops. His focus is on taking care of their needs, not taking over my blog. I hope Deb’s right!

What’s made matters worse is that when Sherman’s not on the computer, Ethel insists she needs it. And I’m NOT taking her on. No way. That old bat scares me.

Would you challenge THIS?

But why does Ethel need to be online all of a sudden? Before I taught her enough to write a blog post, she could barely even turn on the computer! Now, suddenly, she’s a whiz?

It was my brother, Steve, who first noticed Ethel’s change in behavior. For some reason, she stopped reacting to him. He could walk in her room and she wouldn’t bat an eye. He began testing her – walking closer, and closer, until he was just a few inches away. Nothing. No hissing, no scratching, no pained meows. Just quiet. Quiet! Now that’s NOT Ethel!!

My brother Steve. How could you hate this face?

Then Sherman started complaining about her scent. Said she smelled flowery and it was making his troops stink. He tried confronting Ethel, but she told him where he could stick his stinky troops. [Now that’s the Ethel I know!] Sherman says he let that go because she didn’t mean it the way it sounds. The truth is, The General’s just as scared of Ethel as I am. We’re ALL terrified of her! Except maybe Violet. She’s old and doesn’t care enough to be bothered unless Ethel steals her bed! 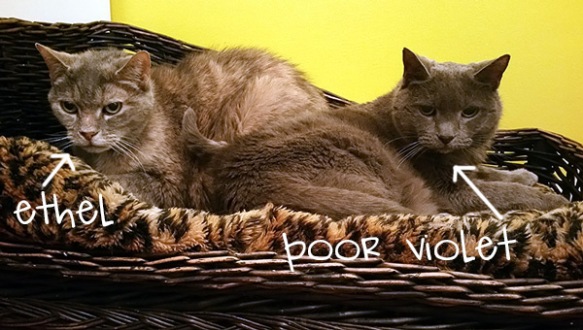 Ethel looking mad she has to share VIOLET’s bed.

Anyway, something was up with Ethel and I needed to get to the bottom of it. So I hid behind the printer to spy while she was online. Turns out Ethel was Skyping with a cat named Arnold. I crept closer to get a better view. 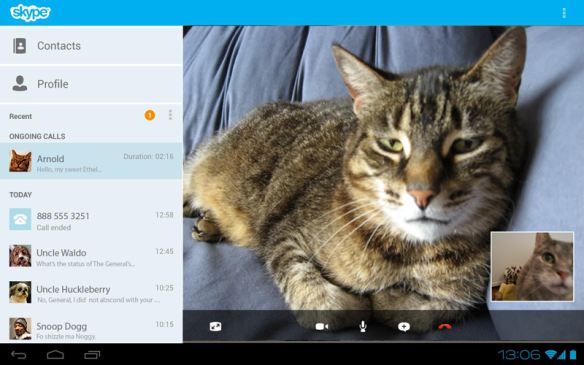 Looks like everyone but me has been making calls on Skype.

But sitting in such close proximity to Ethel, I began to have difficulty breathing because of her perfume. And then I sneezed! Ethel quickly hid her screen, but she knew I’d seen. My heart raced and I considered darting off, but in that instant I knew this was my opportunity. I take my responsibility to this blog seriously and am committed to getting ALL of the information, regardless of the risk to myself.

I asked Ethel who this Arnold is, and she said he’s her boyfriend! Boyfriend!?! Ethel’s TOO OLD to have a boyfriend! Old lady cats don’t date. [May I make a suggestion here? Don’t tell an old lady cat she’s old. It doesn’t go over well.]

After listening to another of Ethel’s tirades, I pressed on. For you, dear reader.

Ethel said Arnold found her through one of her guest posts on my blog. He told her that he was drawn to her “curvaceous figure and siren song.” Poor old Arnold must be senile and deaf.

Ethel went on to say that Arnold understands her plight. He, too, lives with a boorish young, male cat [a Himalayan, no less] that torments him at every turn. Plus, his humans have a Jack Russell Terrier puppy, which Arnold says he wouldn’t wish on his worst enemy.

Apparently they have even more in common. According to Ethel, Arnold is an accomplished drummer, but no one in his house appreciates his talent. All they do is yell at him: “Arnold, stop making so much noise,” “Arnold, quit jumping on Justin’s drum set!”

Ethel claims she’s in love. Oh boy. I see trouble lurking ahead – especially if Arnold turns out to be what Eggnog calls a “playa”.

41 thoughts on “On Golden Paw”